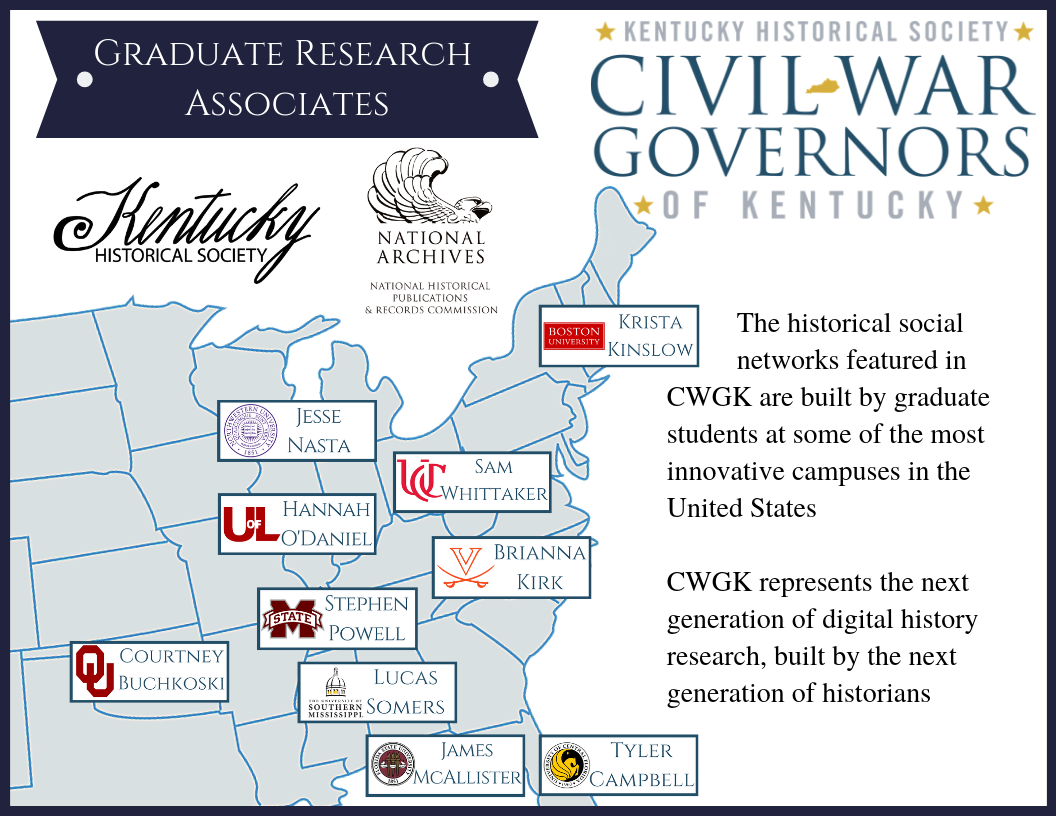 The GRAs underscore a core principle of Civil War Governors and KHS, that how the work of history gets done is as important as the fact that it gets done. The GRA positions allow Civil War Governors to nurture research skills in emerging scholars as well as exposing them to digital project startup and management, collaborative work as a member of a research team, the establishment and maintenance of project policies, and the production of historical knowledge in diverse forms for audiences beyond academia. Working as a GRA on the Civil War Governors project not only builds these students' digital humanities skills portfolios, it makes them better scholarly researchers by encouraging them to flip their engagement with the archive and to think seriously about how research collections are built and curated as well as how they are used by audiences beyond academic researchers like themselves.

Kinslow is a Ph.D. candidate at Boston University. She entered the program in 2011 and is working with Nina Silber. Her dissertation, "Contesting the Centennial," examines the relationship between the 1876 World's Fair and the Civil War and Reconstruction. Far from being a united event, the celebration underscored cultural, political, and racial differences in the country and Americans contested the Centennial. She has presented her work at numerous conferences. In addition, her reviews have appeared in Civil War History and the Civil War Monitor. She has also contributed to the American Yawp and Ideas and Movements in American History.

A 2016 recipient of a M.A. in History from Florida State University, McAllister’s Master’s Thesis research focused on sexual assault and rape during the Civil War. He is continuing to pursue his Ph.D. at Florida State. Prior to earning his graduate degree in history, James worked for the State of Florida for fifteen years in a variety of positions including software development. He used his project management experience to organize the Florida State Graduate Conference in the spring of 2016.

Nasta is a Ph.D. Candidate in U.S. History at Northwestern University, with a focus in African American and socio-legal history. His dissertation, “Making Slavery’s Borders: Legal Culture and the Transformation of Slavery’s Northwestern Frontier, 1787-1865,” examines how diverse groups gave legal meaning to the Mississippi River border between gradually-free and slave states. Nasta has held fellowships in The Chabraja Center for Historical Studies and Wesleyan University’s Writing Program, where he has mentored students in historical research and writing.

A 2014 recipient of a B.A. in History from Murray State University O’Daniel is currently a M.A. in History student at the University of Louisville.  She studies race, gender, and religion in nineteenth century Kentucky.  O’Daniel previously interned in digital oral history collections at KHS and Murray State University.  She assisted and co-produced digital projects at UofL, including Parkland Neighborhood History: Memories of Resistance and Rebirth in a West Louisville Community (2015), Discover Indiana (2016), and a digital story, All of our Grandmothers, for the art exhibition Capturing Women's History: Quilts, Activism, and Storytelling (2016).

Powell is a Ph.D. student in the Department of History at Mississippi State University. His research interests focus on identity construction and concepts of union in Maryland during the Civil War and Reconstruction.  Powell is currently interning at the Ulysses S. Grant Presidential Library in Starkville, Mississippi, helping to annotate a new edition of Grant’s memoirs.  In 2014, he wrote “The Postmaster and the General: Benjamin Franklin and Edward Braddock in Frederick,” an article published in Catoctin History.

Whittaker is a M.A. student with the University of Cincinnati History Department. His work focuses on nineteenth century United States political history, particularly in the Border South. Past research topics include third party use of mass media, the Election of 1860 in Kentucky, and the Constitutional Union Party. Sam graduated from the University of Louisville with a B.A. in History in 2015. Prior to joining CWG-K, he worked as an archival assistant at the Senator Mitch McConnell and Secretary Elaine L. Chao Archives.